As an extension of the spirit of the 1968 Winter Olympic Games, the skating rink is a defining project for Grenoble. Nevertheless, the client was keen that it should also be an economical building. The response is a "high-density" project, a synthetic architecture that is both optimised and generous, compact, friendly and lively.

The skating rink is situated in the south of Grenoble, in a 1970s neighbourhood where the focus of urban planning was economic efficiency, and on cars to the exclusion of pedestrians. The public space is distended, undifferentiated and confused. The project forms a rectangle, running along Avenue d’Innsbrück, which is one of Grenoble’s southern entries. The structure is designed to be simple and distinctive, and to tauten the layout of the avenue that signifies arrival in the city.

The programme comprises two skating rinks, one 3500 seater stadium for competition, and the other for public use.

The building’s shape is generated by the layout of the ice rinks, which determined the floor plan and the contours of the facades in a way that combines compactness and fluidity. Around the main rink, the seating is arranged to form an arena close to the ice, with the entrance hall forming a concentric ring that follows the external outlines of the building. The two ice rinks are positioned along a single axis, and all the elements of the programme are combined under a continuous roof structure. This forms a horizontal roofline at its edges, a marquee that holds the whole composition together. This governing plane twists into a convex shell covering and increasing the height of the competition rink, and into a concave shell over the recreational rink. The roof forms a fifth facade, a relief-plan covered with inset aluminium strips (Kalzip). Inside there is a contrast between the raw materials of the structure – concrete seating, galvanised steel roof – and the colour range of the floors, stairways, seats, etc.: aniseed green, fuchsia, dark orange, turquoise blue, ultramarine.

The conceptual principle of the skating rink is semiotic minimalism: the image sought is one of understated significance, in poetic connection with the raw material of skating: ice. The facades are like a vertical sheet of ice which unfurls in a flexible ribbon around the building, evoking the movement of the skaters, the fluidity and continuity of gliding. The ribbon moulds to the contours of the building, like a stocking stretched over contracting muscle. The "ice" effect is produced by the depth, the transparency, the vibration of matter. This effect is achieved by means of a double facade, which will consist of one efficient, technical, industrial type surface, spray-painted on its outer side with blue-and-white graphics, and clad in a translucent polycarbonate ornamental skin. Between the two skins, lines of optical fibres will diffuse light to make the material "vibrate" and to accentuate the sense of depth at night.

The interior roof structure of the main rink is a very light latticework, made up of tubular steel sections 6 m long, intersecting to form a shell supported by posts, themselves linked by tie-rods. Together, the resulting vertical trapeziums form a sort of spatial "cushion", spanning a space measuring twenty four metres by fifty metres. The "cushion" is supported along its edges by oblong posts formed of two circular tubes connected by an HEA section. The posts are on rocker bearings, in other words jointed at the top and bottom to prevent motion being transmitted from the roof to the concrete podium block.

In order to optimise the number of spectator seats and the view, the upper seating levels, which are made of prefabricated concrete and form a ring around the stadium, are supported by metal consoles grafted onto the pillars.

The inner roof structure of the smaller ice rink is made of radiating triangulated beams that support the convex roof. 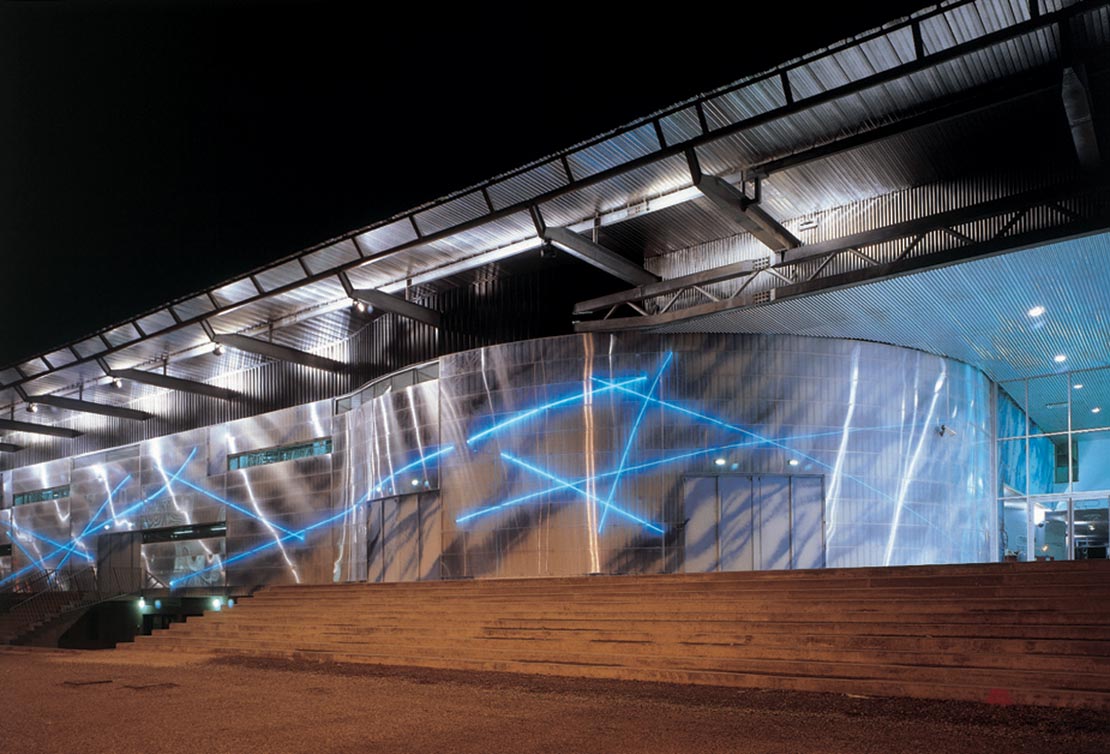 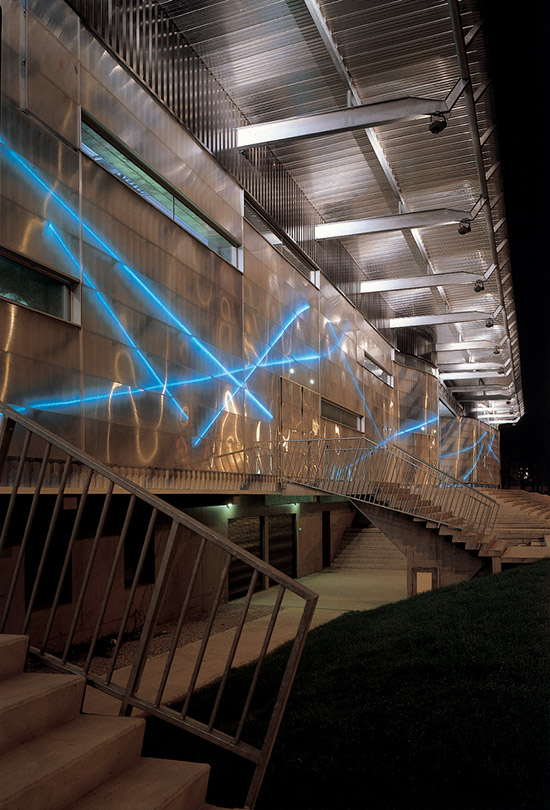 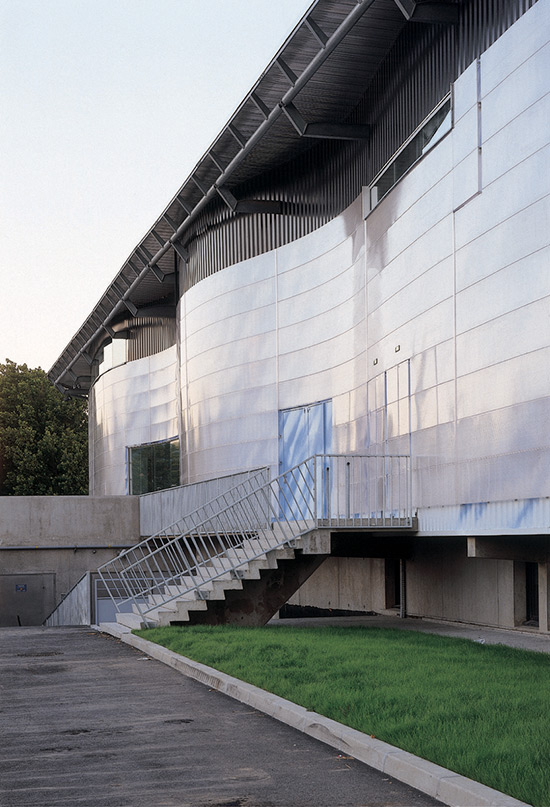 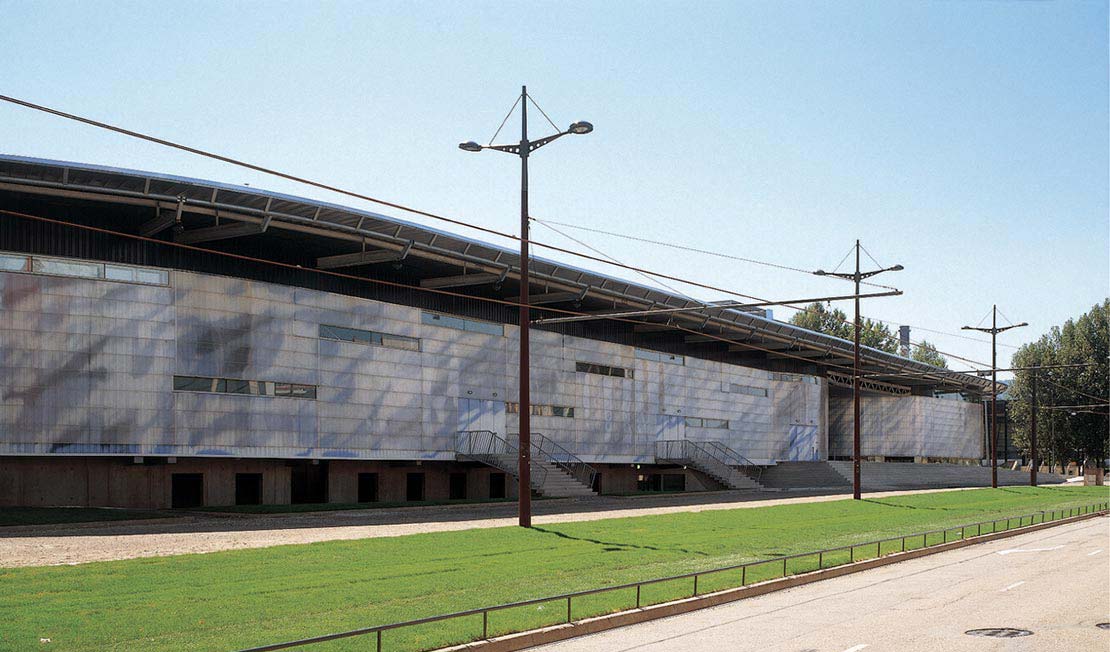 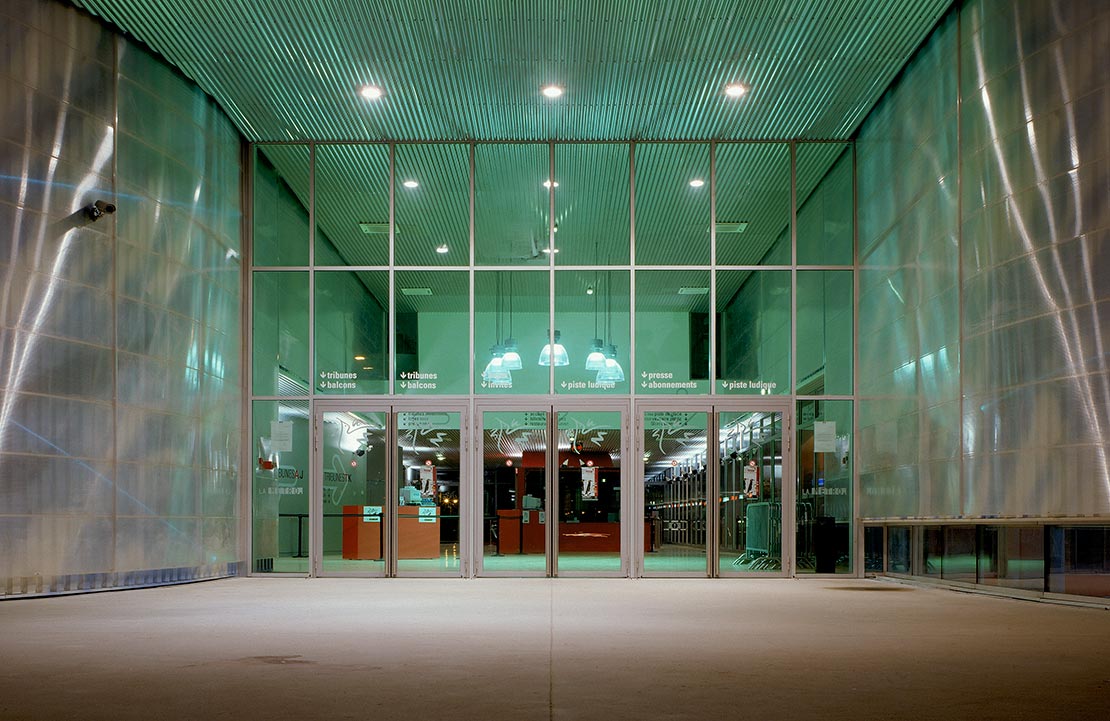 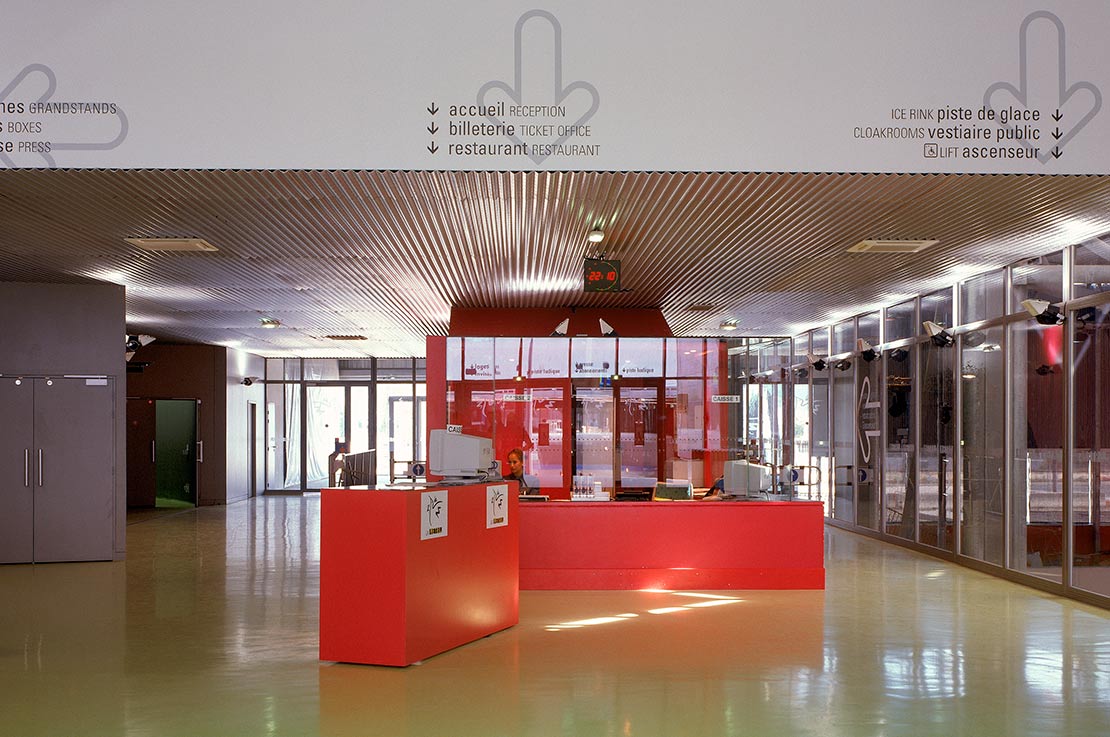 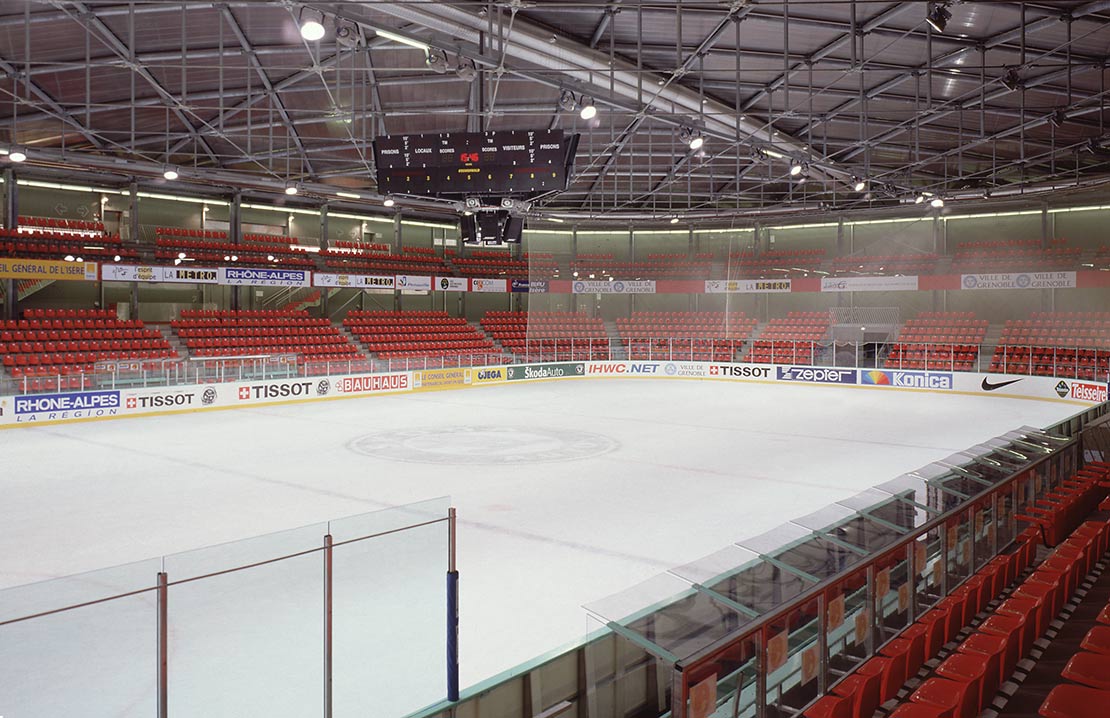 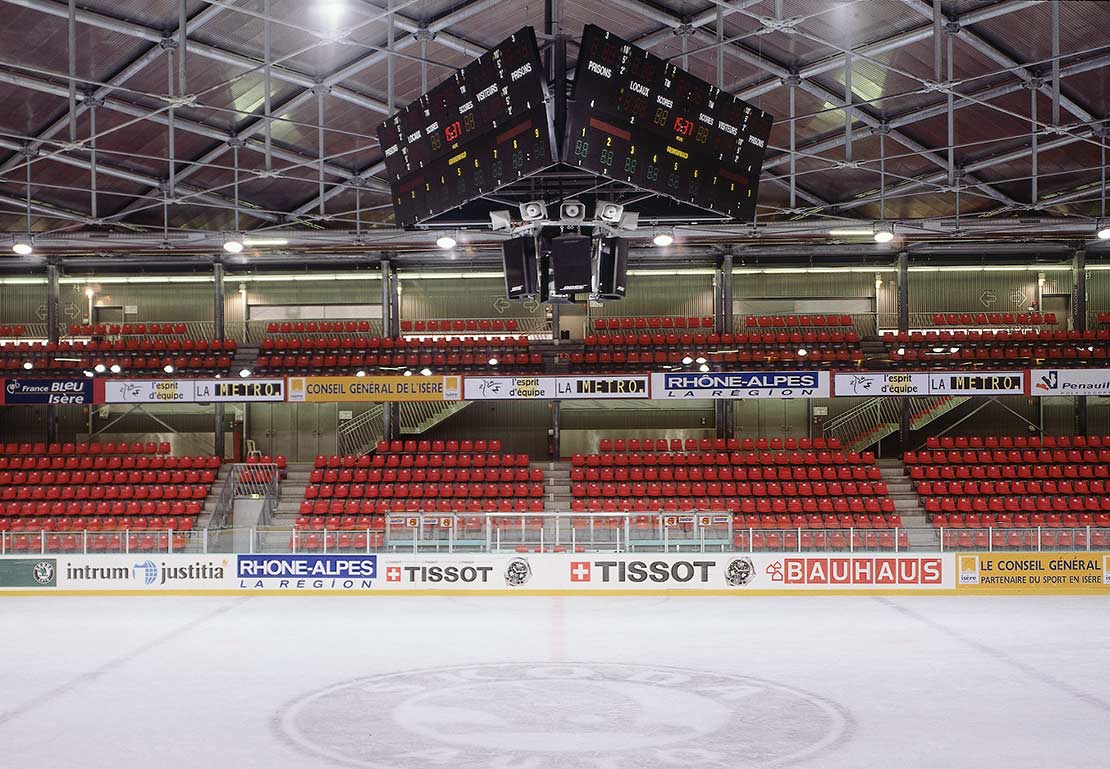 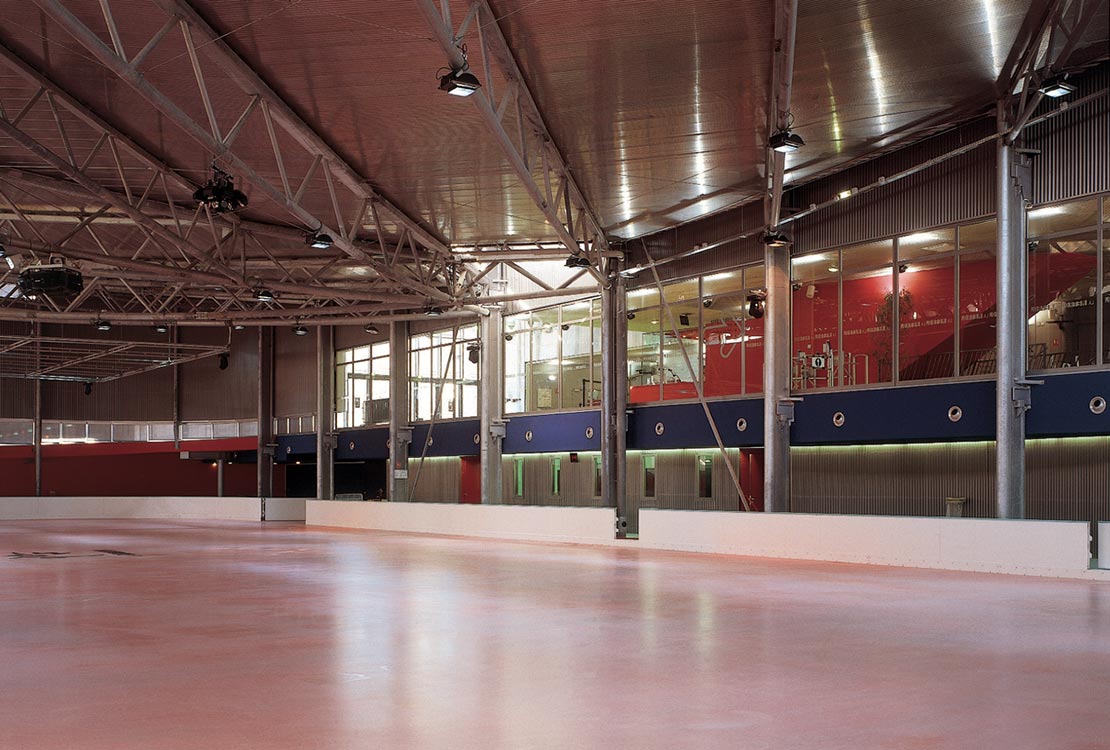 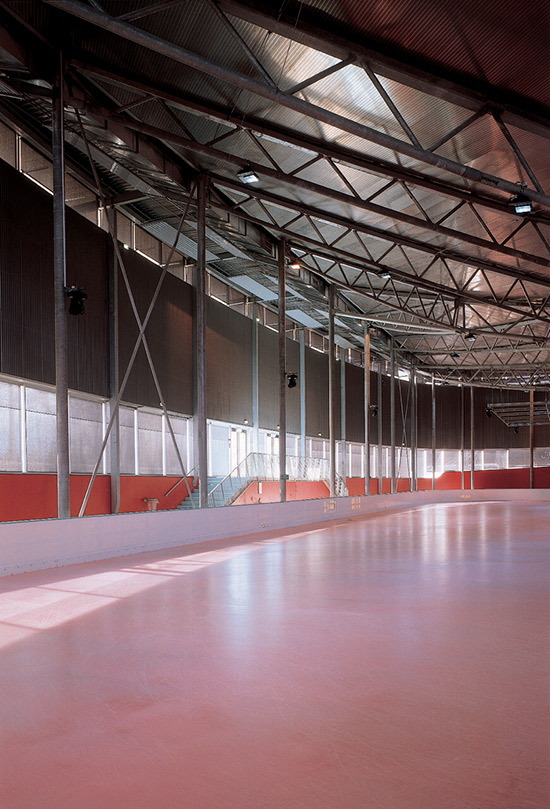 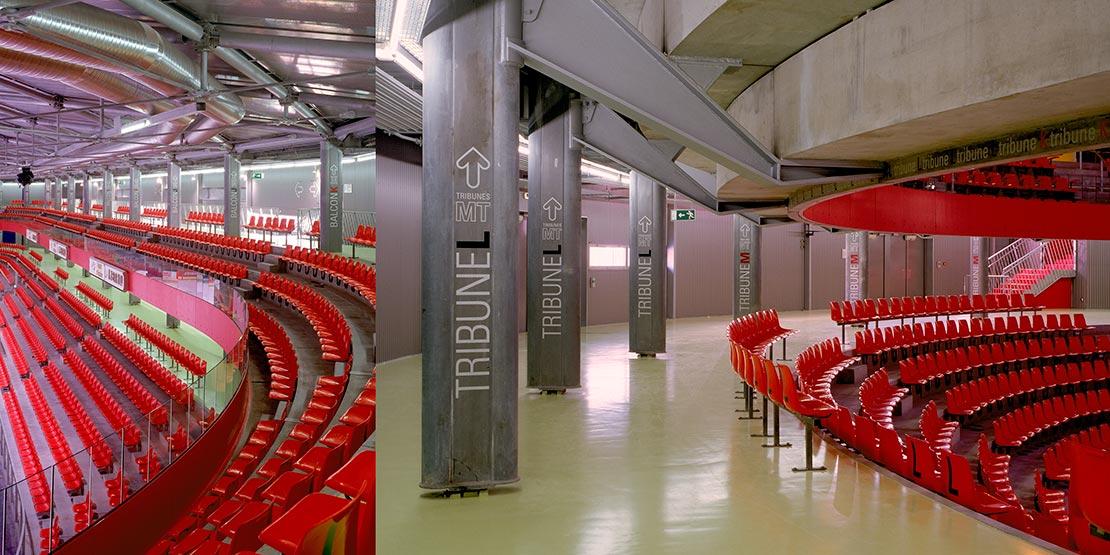 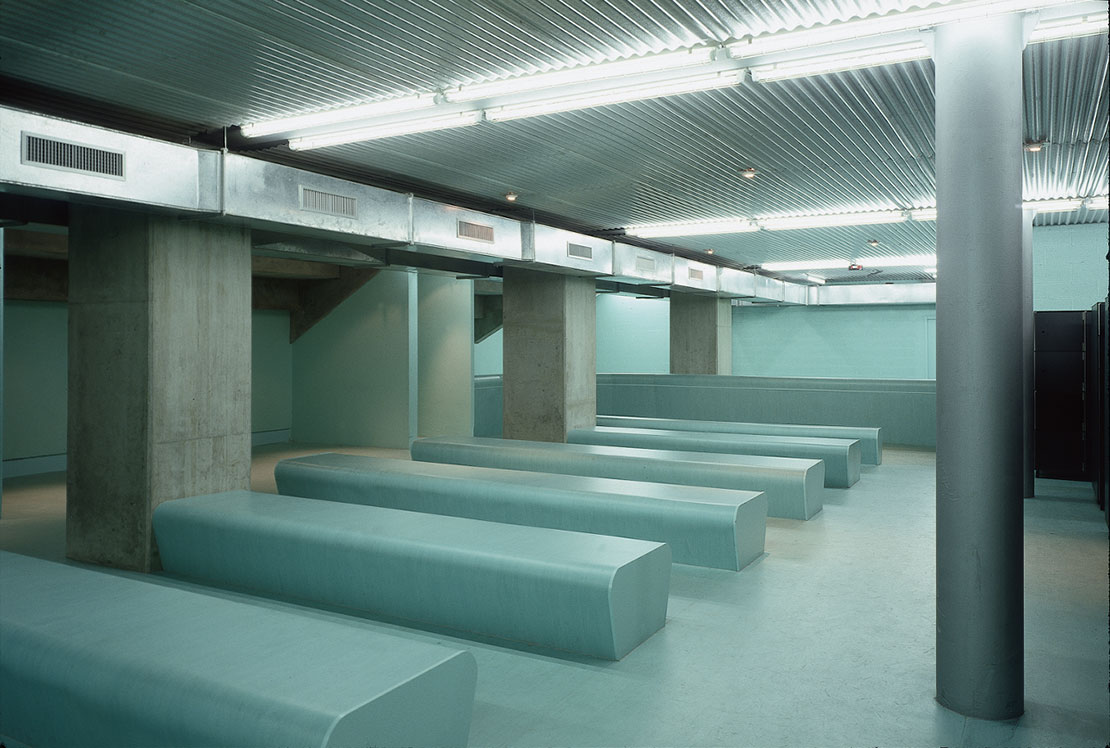 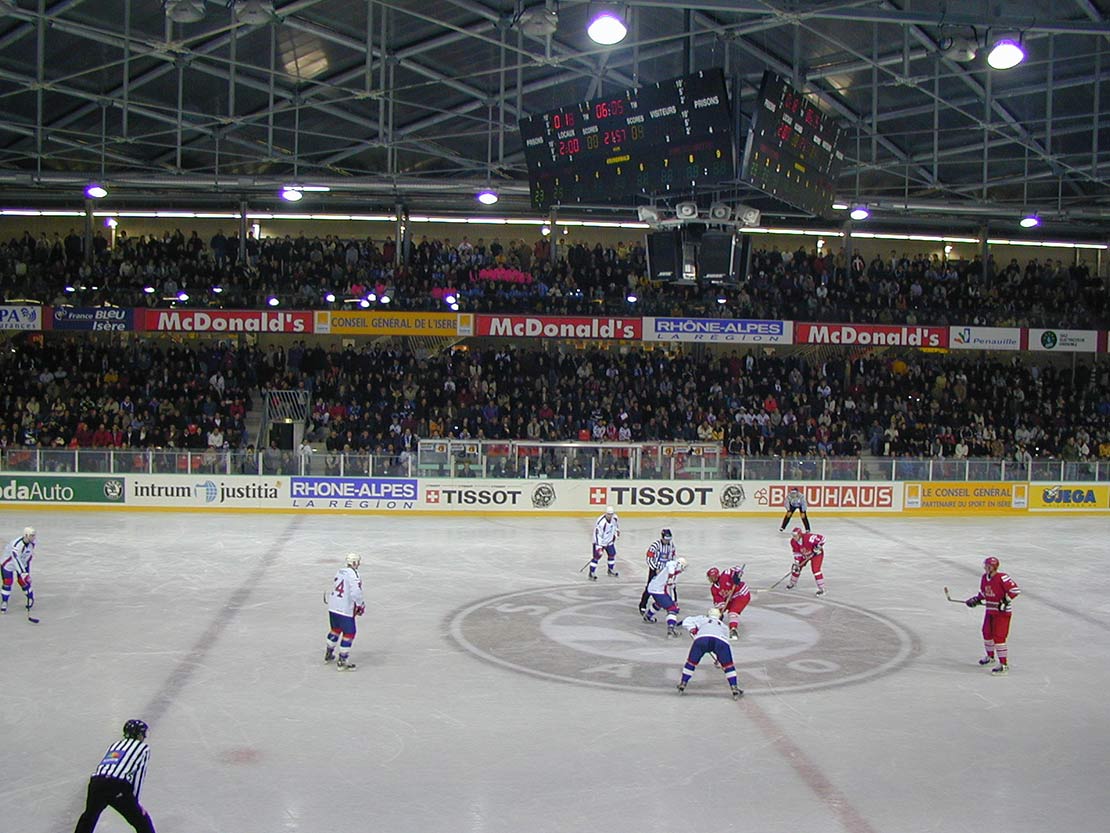 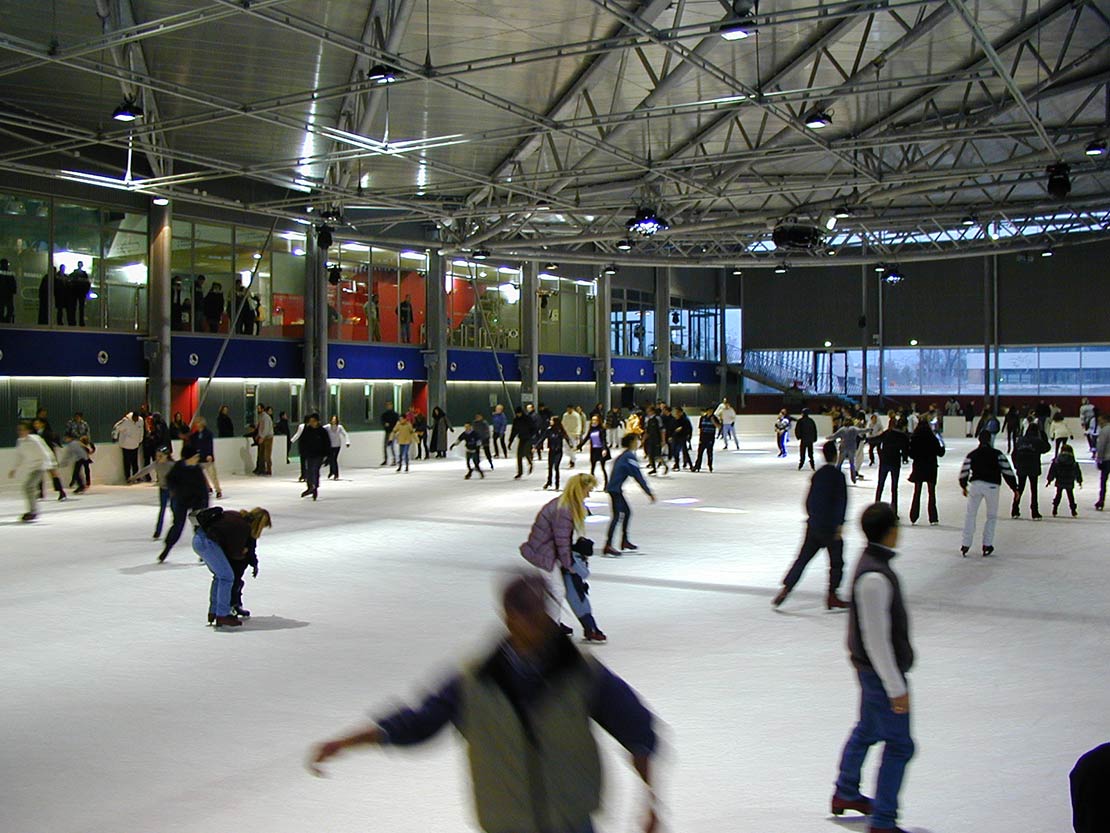 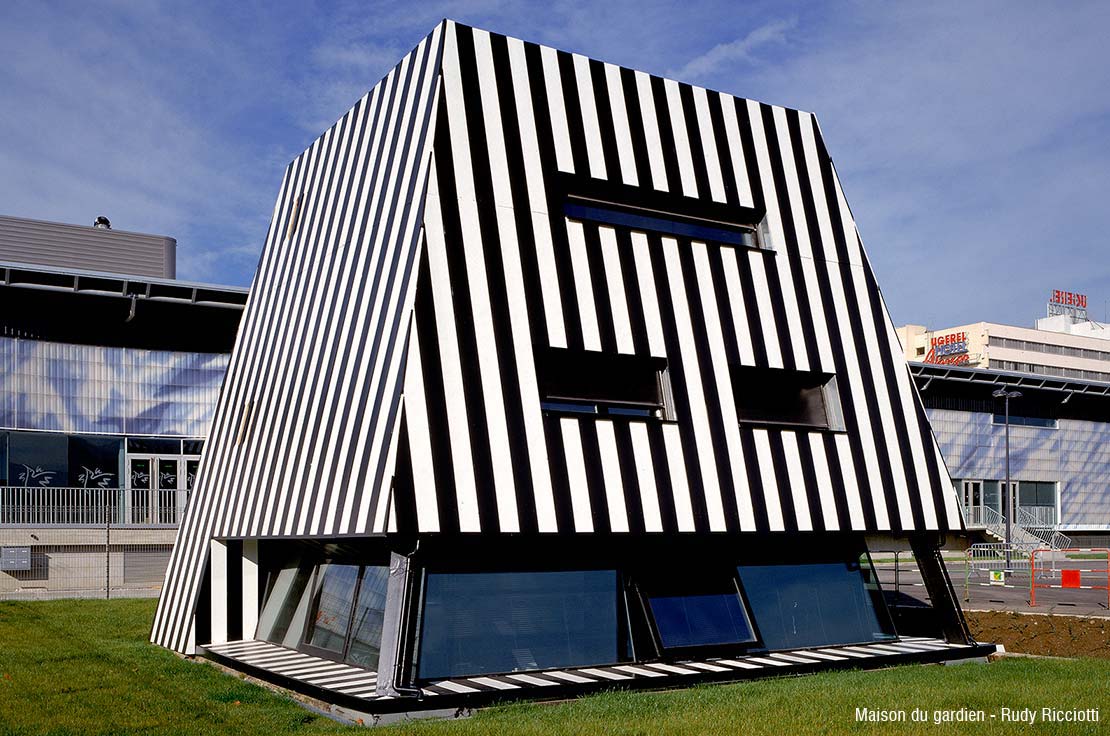 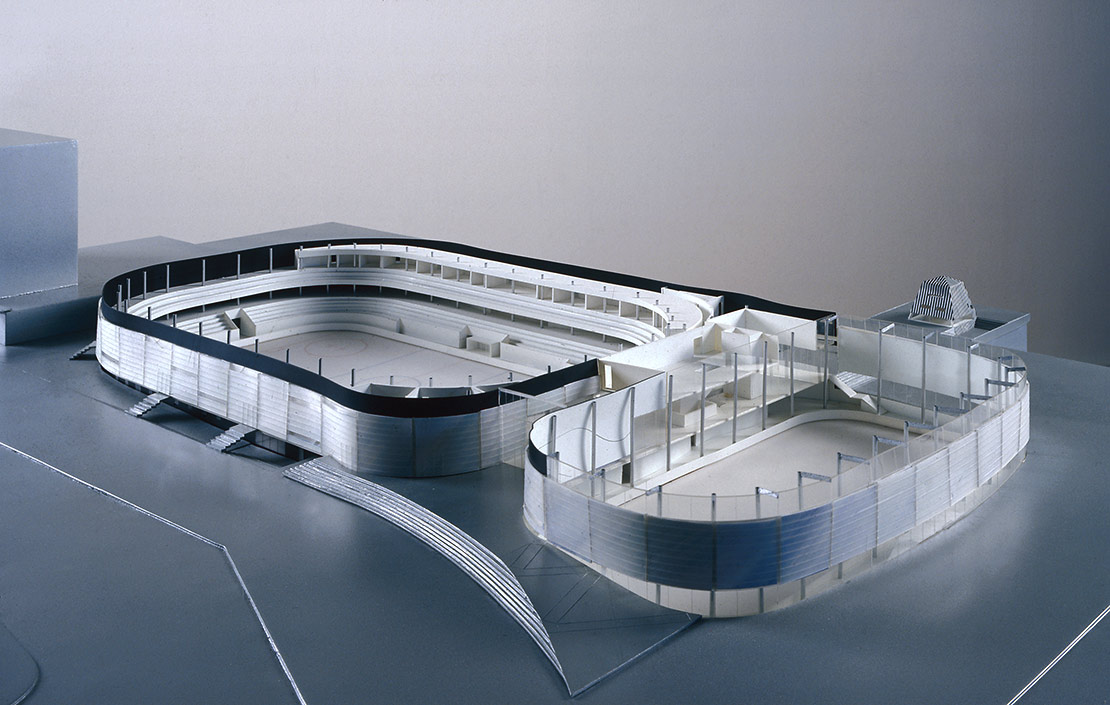 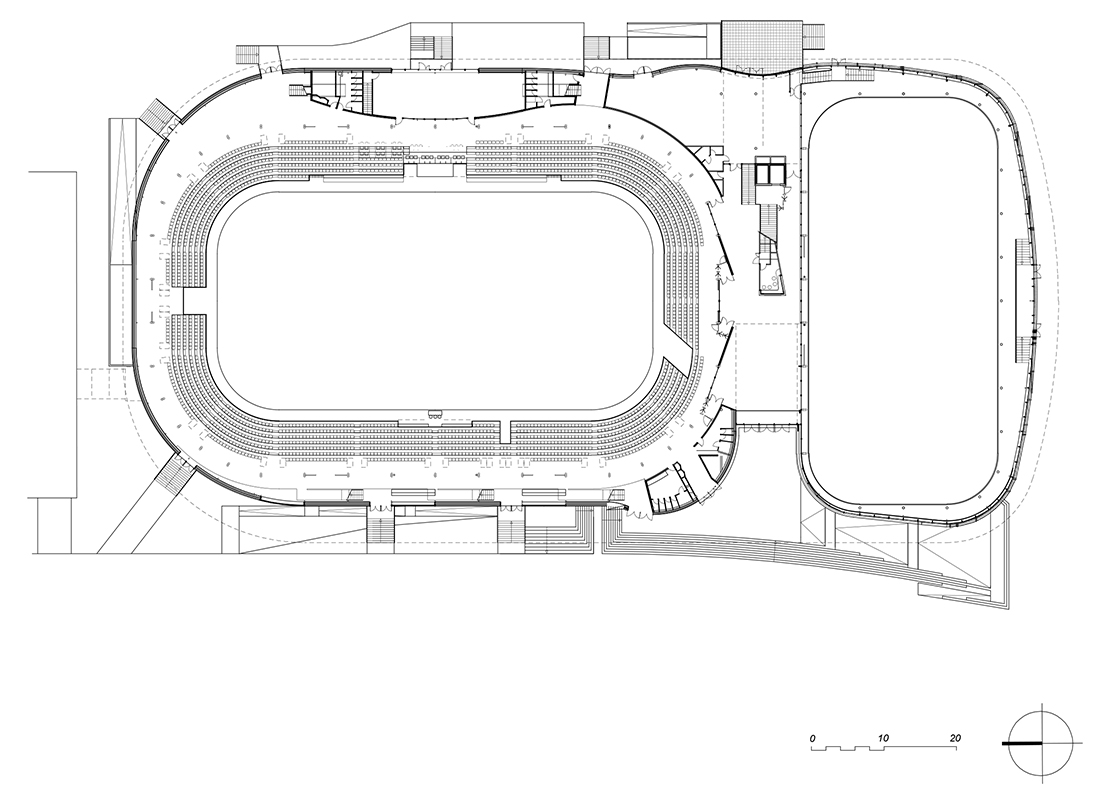